A refreshed identity for Yahoo.

Yahoo is the pioneering web portal and search engine that helps hundreds of millions of users around the world find the information they need online. Pentagram has worked with Yahoo on a refresh of its visual identity that captures the exuberant personality of the brand and reimagines it for the future.

Pentagram collaborated closely with Yahoo leadership on the project, the first significant change to the brand since the previous logo was introduced in 2013. The update coincides with the launch of new products and enhancements, including a reimagined Yahoo Mail app, and signals a strategic change for the company as it prepares to introduce other products and services over the coming year.

The identity reflects a new brand strategy for Yahoo that focuses on helping users find a more personalized, customized experience online. In the decades since Yahoo first launched, the internet has grown to be so big and ubiquitous, it’s easy to become overwhelmed with information. With its new products, Yahoo will empower users to better sift out irrelevant parts of the digital world, giving them more control of what they see and when they see it. The strategy positions Yahoo as an “amplification brand,” amplifying the things that matter, helping to “amplify you.” The idea is neatly visualized in Yahoo’s exclamation point, a punctuation mark that literally stands for amplification.

This strategy of simplicity and amplification is expressed in a new logo that is simpler and more flexible than its predecessor, and that looks back to the original, quirky 1996 logo. The new wordmark is set in Centra No. 2 Extrabold, and the letters of the logotype have been modified to be more geometric and compact. The exclamation mark has been italicized for emphasis, as it has been in every iteration of the logo since the company’s founding. The “y” and “!” of the logo are both set at an angle of 22.5 degrees, a forward tilt that suggests a sense of momentum and excitement. The angle––precisely 1/16th of a circle––is the basis for visual language built around angles and incremental slices.

As with the original logo, the new identity captures the voice of a brand named after an exclamation of joy and discovery, and still looks like it should be shouted or yodeled (”yahoOOOOoooo!”). The repeating circles of the “a,” “o”s and the dot on the exclamation point echo of the audio mnemonic of the yodel.

The Pentagram designers worked with Yahoo to iterate through and evaluate a wide range of options—some that were more evocative of the original 1996 logo with its offset baseline and random angles, and some that were completely new. The team conducted in-depth research with employees and stakeholders as part of the process.

The logo has been optimized to work across various platforms and scales, from the small canvas of a mobile app to the side of a building. The identity is further streamlined with a simple “y!” monogram, useful for favicons and social media icons. The monogram is also the foundation for a cohesive brand architecture that locks up the “y!” with various channels to create sub-brands for Yahoo Finance, Yahoo Sports, and Yahoo Weather.

Of course, the identity appears in purple, Yahoo’s signature color since 2003. (Internally, the rebranding was called “Project Purple.”) The designers refined the palette and made it more contemporary, selecting a primary purple (a bright shade they called “grape jelly”) and secondary purples (“hulk pants” and “malbec”), as well as accent colors. 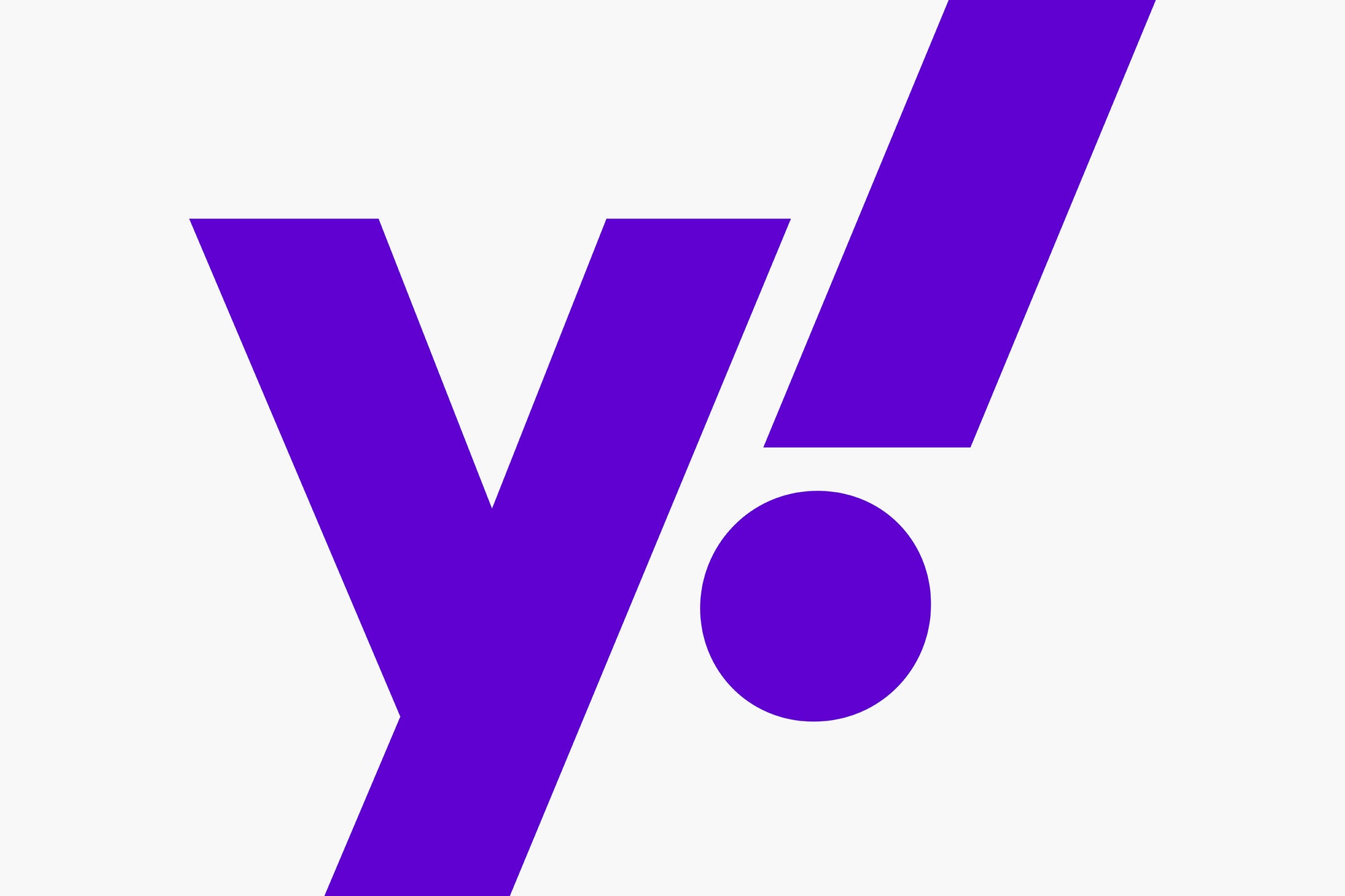 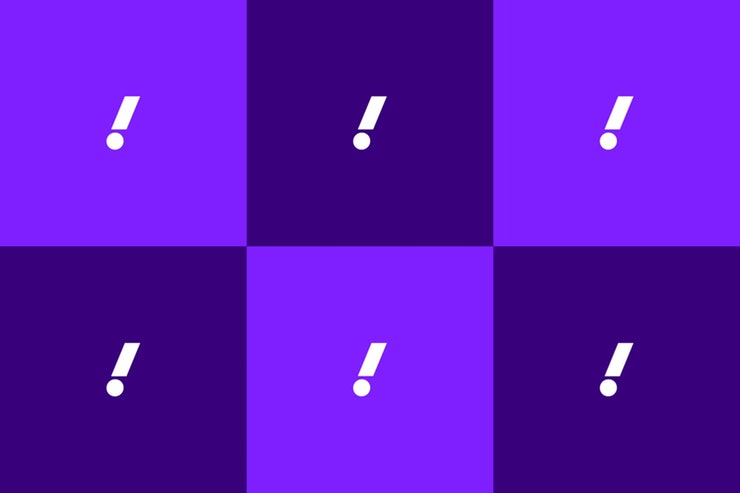 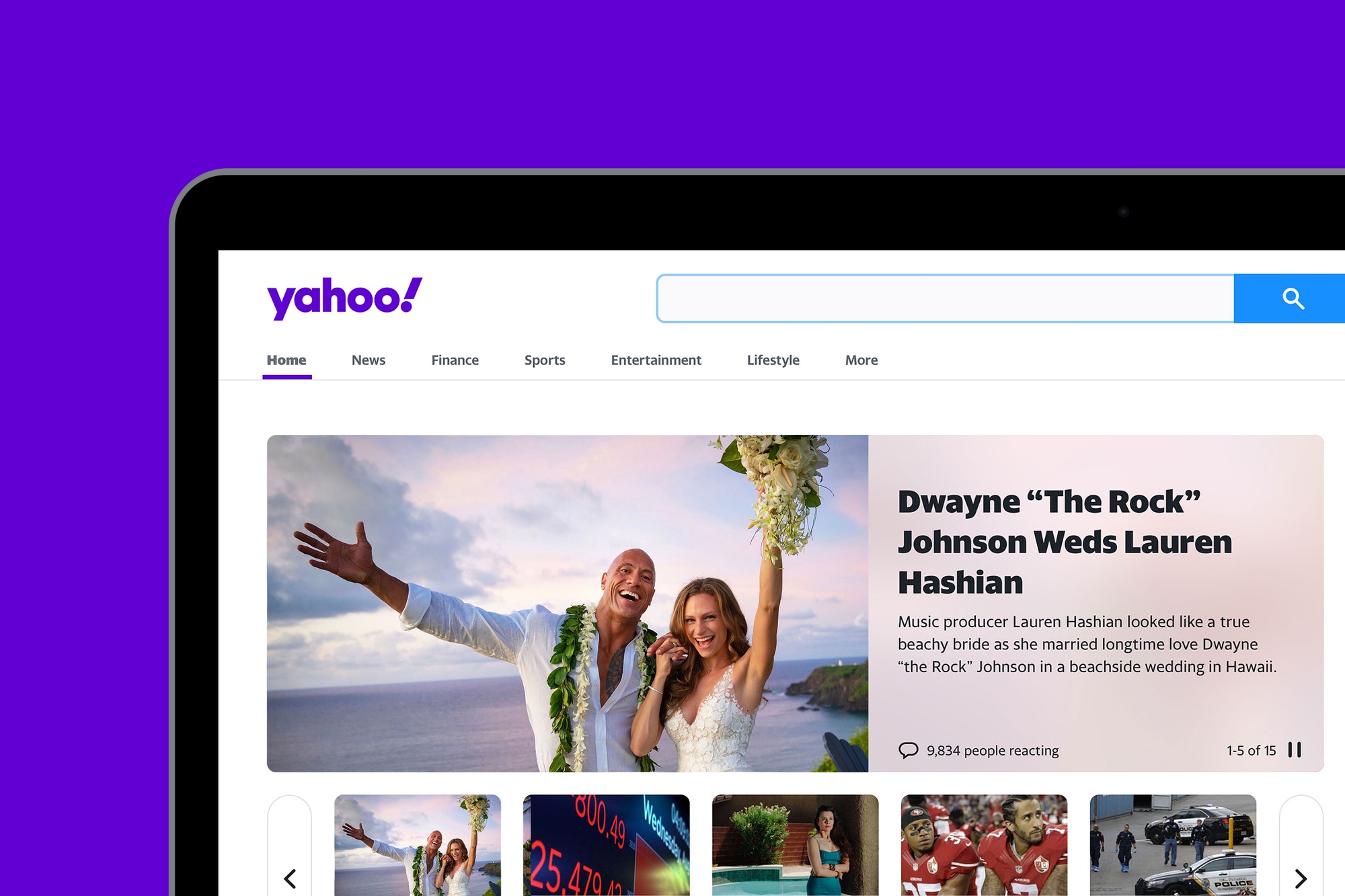 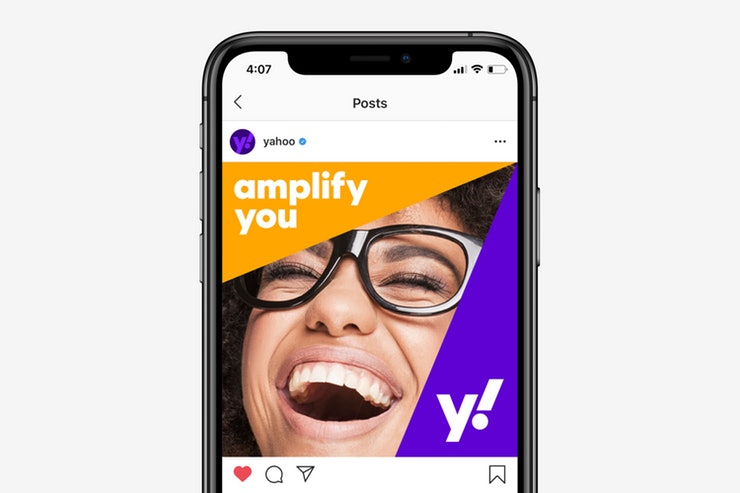 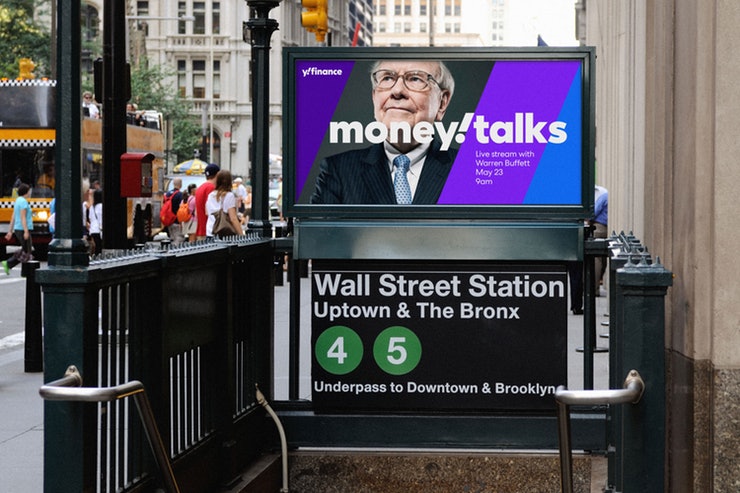 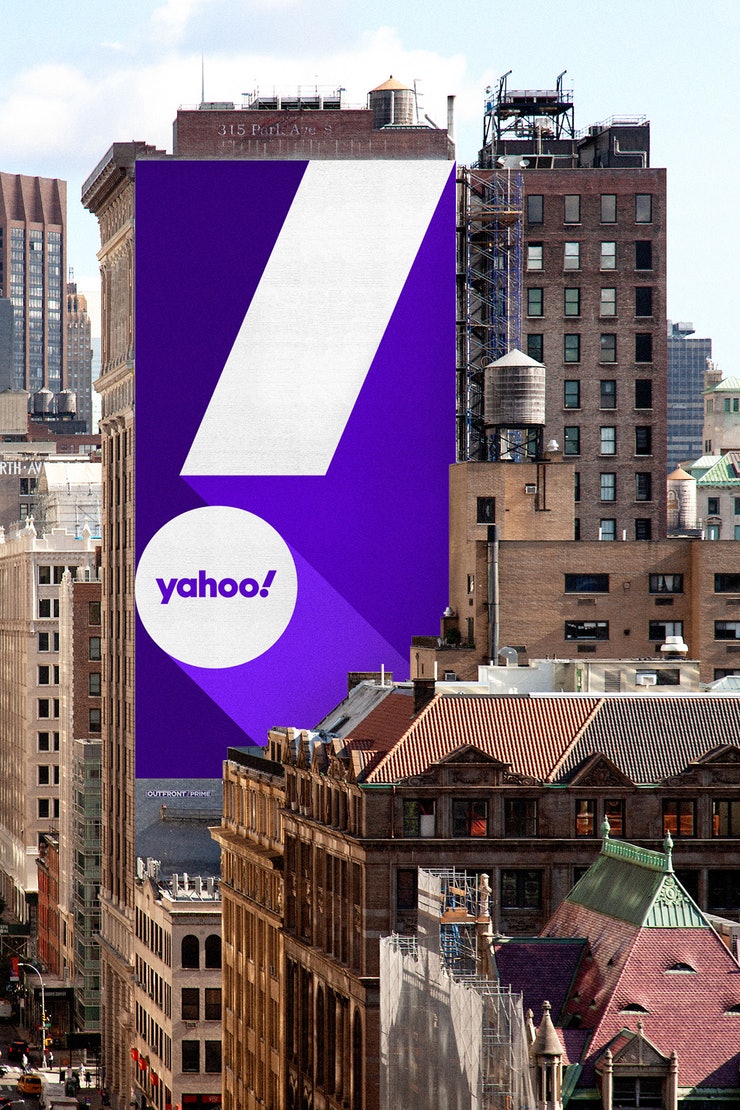 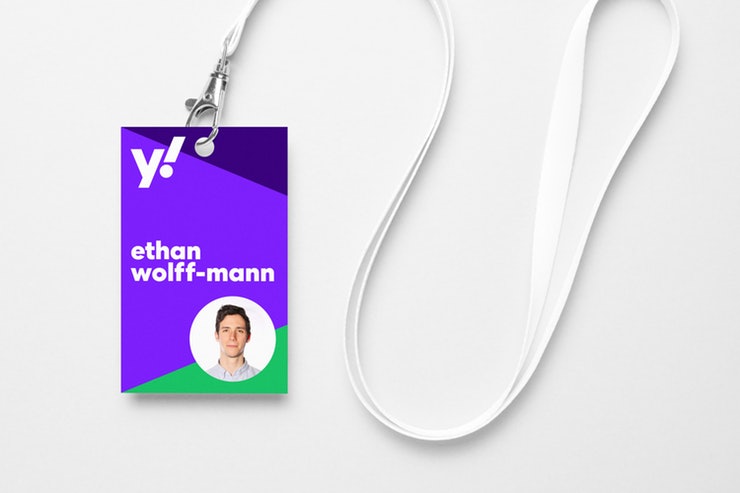 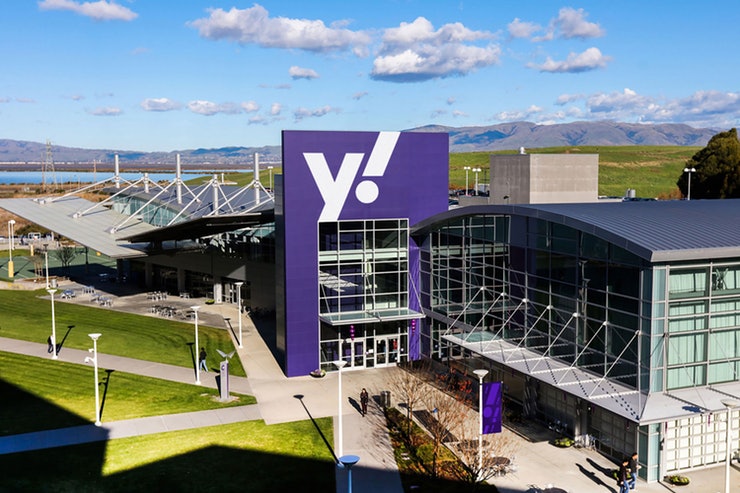 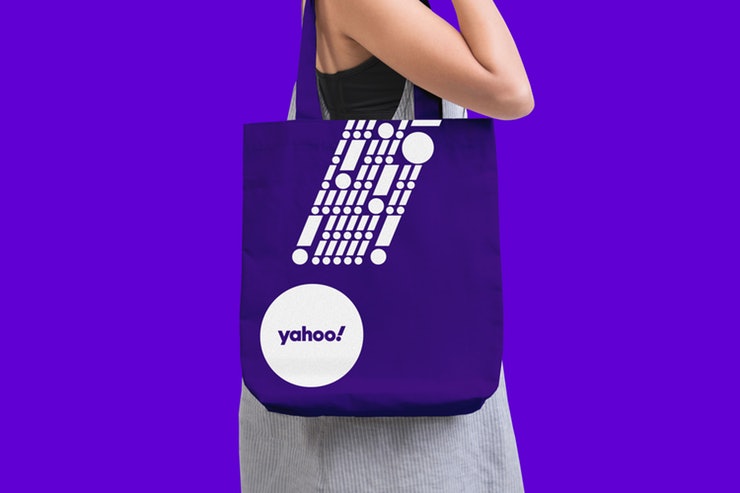