The decision was made by Members of the Implementation Executive on Monday, 23 June. Based on the shield from Cornwall's ceremonial crest, the new logo is inspiring and dynamic, bringing a contemporary modern feel to the best of Cornish tradition.

Interweaving lines of gold and black bring to mind the Cornish tartan and represent the ways in which Cornish communities connect together. The positive, dynamic lines of the design represent growth and movement.

"We are creating a fresh new council for Cornwall and it is important that this is recognised with a new modern identity. However, we have not cast tradition aside. This new logo has elements of Cornish history at its very core."

David cont'd :"We know from consulting councillors and staff that some people were worried that a new identity would see the end of the traditional Cornish crest. I can reassure them that the traditional crest with miner, fisherman and chough will not be lost – it will still be used by the new council for ceremonial purposes and to represent Cornwall."

The new identity was developed by the in-house communications unit and developed in several informal sessions with the Implementation Executive. Comments from councillors and staff were also taken into account in making the final choice.

The new design is extremely flexible. It works well in electronic format on websites and mobile phones and in 3D as well as on uniforms, paper, signage and vehicles. Other colours from the Cornish tartan can also be used to represent specific services.

Further work will now be done to develop clear guidance on the use of the logo. At the meeting of the Implementation Executive at the end of July detailed proposals, indicative costs and options will be presented for the implementation of the new identity next year... in time for the launch of the Cornwall Council. 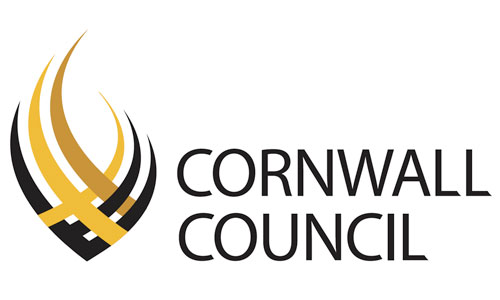