The logo of the Danish Presidency of the Council is a dynamic visual story about Denmark's EU Presidency at the beginning of 2012. The taking over of the Presidency is illustrated through the double symbolism between 1 and 2, which shows that Denmark takes on the Presidency in 2012 and signals the Presidency's duration of half a year. The logo also signals the dynamic of cooperation in the EU – a shared task that is in constant change and always developing.

Many of the EU’s major policies will be renegotiated during the Danish Presidency of the Council, and Denmark will work towards renewing the EU’s policies to the benefit of European citizens. The logo signals that developments in and around Europe are not static. Therefore, the European countries must work together to renew and further develop the European project to make sure that Europe remains capable of handling the challenges of the future. Lastly, the logo also signals openness and cooperation – values that are crucial to a successful Presidency.

The logo accentuates the red and white colours of the Danish flag, while at the same time emphasising one of Denmark's strengths in Europe and the world: our tradition for unique design.

The advertising agency Kunde & Co won the competition to design a visual identity for the Presidency, including a logo. The competition was issued in 2009 by the Ministry of Foreign Affairs in collaboration with the Danish Design Center, DDC.

As we all know, Denmark assumes the Presidency of the Council of the European Union 1 January 2012. Throughout the six months that the Presidency lasts, Denmark will lead the way in driving European cooperation forward together with the permanent European stakeholders.

The advertising agency Kunde & Co has designed a visual identity including a logo for the Danish EU Presidency to be used in the communication activities of the Presidency. “The EU Presidency represents a unique opportunity for Denmark to contribute to finding solutions to the challenges that Europe is facing, including ensuring that we come out of the debt crisis with a future-oriented focus on growth opportunities. The Presidency logo expresses the dynamism that we will work to bring to Europe," said Minister for European Affairs Nicolai Wammen and continued: "At the same time, the Presidency means that there will be international attention on Denmark, something which we must take advantage of to highlight Danish strengths. To this end, the logo is an expression of the proud Danish tradition within the field of design, for which we are know throughout the world”.

Use of the Presidency logo and the visual identity are, in principle, restricted to the state administration. However, host cities of official meetings, organisations in host cities, official sponsors as well as other stakeholders may use the official Presidency logo by agreement with the Ministry of Foreign Affairs of Denmark. Background In spring, the Ministry of Foreign Affairs of Denmark, in cooperation with the Danish Design Centre, arranged a design competition for a visual identity including a logo for the Danish EU Presidency in 2012. The advertising agency Kunde & Co won the competition and over the summer they worked to draft a design manual with guidelines for the practical implementation of the visual identity. The logo, eu2012.dk, is a dynamic visual narrative of Denmark’s EU Presidency in the beginning of 2012.

The transfer of the Presidency is illustrated through the double symbolism between the numbers 1 and 2, which both illustrates that Denmark is now assuming the Presidency and signals the six months’ duration of the Presidency. The logo also signals the dynamic that exists in EU cooperation – cooperation that is constantly changing and being renewed. Many major EU policies are to be negotiated during the Danish Presidency, and Denmark will, among other things, strive to ensure that EU policies are future-proofed up to 2020, to the benefit of the citizens of the EU.

The logo highlights the Danish colours, red and white, and at the same time emphasises one of the Danish strengths in Europe and the world, the Danish tradition for design. 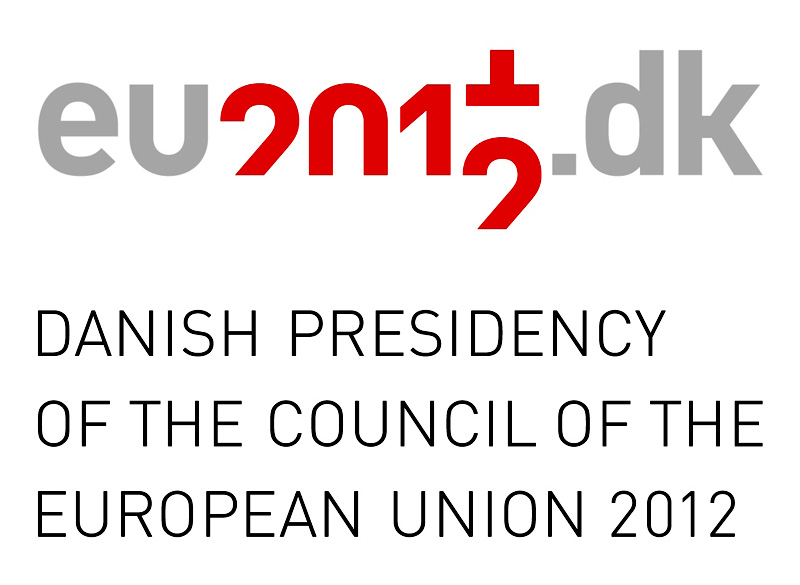