Garuda Indonesia, one of Asia’s leading airlines, today unveiled a refreshed corporate identity and new visual system designed by Landor Associates, one of the world’s leading strategic brand consulting and design firms. Garuda Indonesia embarked on this brand refresh as part of a broader initiative to better reflect its domestic leadership and transform customers’ travel experiences when flying with the airline. Landor was appointed based on the work they did on Garuda’s previous and original identity in 1985.

The airline’s outdated logotype was replaced with a more modern one and its beautiful bird symbol was retained, but refined. The accompanying visual system was refreshed and is built around a new design element—a stylized rendering of a feather known as “nature’s wing” which connects the look of a fluttering wing with other elements in nature—from water ripples to the petals of a flower. This visual system celebrates the connection between Garuda’s iconic wing, its home in Indonesia, and the airlines’ commitment to its valued customers. “Garuda is committed to respecting nature while celebrating the beauty of their national assets and rich Indonesian culture,” said Andy Keene, creative director at Landor Associates. “We wanted to promote Garuda using the same spirit as the Visit Indonesia Year—which emphasizes how Indonesia’s beautiful landscape strikes all of our senses—and integrate Garuda’s harmonious, multi-faceted service with a keen understanding of its passengers’ needs to live life to the fullest.

This new program allows the passenger to see Garuda and Indonesia at its best.” The nature’s wing element appears in both explicit and subtle forms on various applications from a vibrant new livery, to membership cards, to advertising and successfully captures the spirit of Indonesian hospitality. It also helps convey Garuda’s vision to be seen as a more confident and professional airline. The new image infuses attributes of caring service, responsiveness, and professional dedication into the new Garuda Indonesia brand.

The President of Indonesia, Susilo Bambang Yudhoyono, known as President SBY has commented that the new Garuda livery design Landor has created is both beautiful and uplifting for Garuda and the image of Indonesia. The first of the 50 new B737-800 NG (Next Generation) aircraft will soar high in the sky on 23 July 2009, and proudly showcase the refined Garuda Indonesia brand with the renewed energy of a world-class airline, and the elegant nuances of Indonesia. 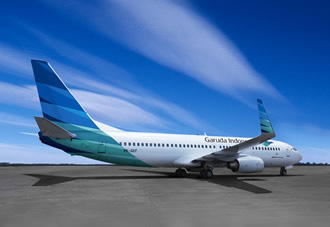