A creative company needs an innovative workspace. For Grey Group, one of the largest marketing communications companies in the world, a move to a new, state-of-the-art headquarters in the Flatiron District, a New York design center, symbolized a renewed commitment to creativity. Paula Scher has developed an inventive program of environmental graphics for the offices, which were designed by Studios Architecture.

Grey moved from a sedate midtown location to 200 Fifth Avenue, the former International Toy Center, a century-old landmark building that once housed several toy companies. (Grey is our new neighbor; the building is a short two blocks away from Pentagram’s offices at 204 Fifth.) Grey Group is part of industry giant WPP and counts among its clients blue-chip companies like Pfizer, Procter & Gamble, Canon, 3M and Eli Lilly. The Grey divisions at the new headquarters include: Grey New York, its flagship advertising agency; G2, its activation marketing agency; and Cohn & Wolfe, its sister company and PR partner. In the new headquarters these divisions are located from the second to sixth floors, with an entrance lobby on the first floor.

Scher and Studios previously collaborated on the interiors of the Bloomberg L.P. headquarters, where Scher developed an environment of numbers that was a three-dimensional manifestation of the Bloomberg brand. For Grey, Scher has designed graphically playful signage that captures and promotes the creativity of the company’s various divisions. The program utilizes materials used in the interior design to create a series of optical illusions that brand the agency in the space. “It’s a house of visual games,” says Scher. 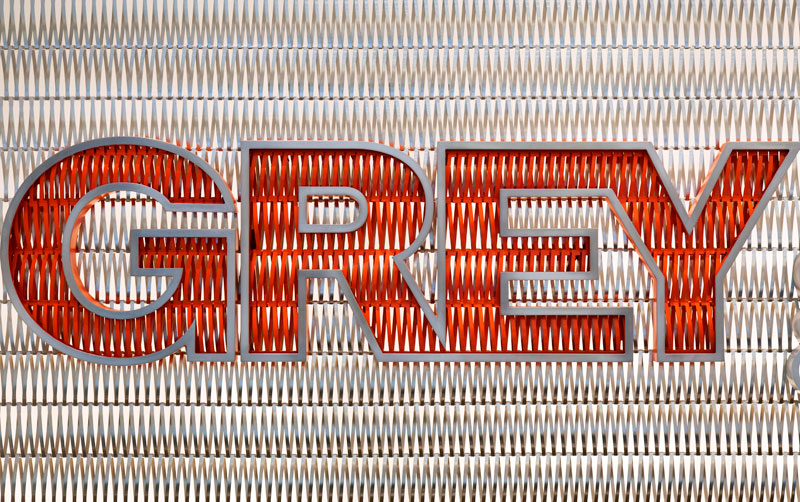