Michelin is introducing a new sound logo as an integral part of its corporate identity. Designed in collaboration with Sixième Son, the 32-second sequence of musical notes supports the brand’s image, message and baseline.

It will be deployed across all media platforms – including television, radio, telephone hold systems, advertising campaigns and trade fair stands – and will be systematically featured in TV packshots and future radio ads.

The introduction of a new sound logo, whose recent unveiling coincides with the 2010 Paris Motor Show, is part of a project begun in 1998 to enhance the MICHELIN brand and its identity.

“The new audio identity will enable the brand to express - through sound - the concepts of mobility, modern living, innovation, quality and enjoyment,” said Claire Dorland Clauzel, Senior Vice President Michelin Communication and Brands and a member of the Group Executive Council. “It actively supports the brand by accentuating its personality and creating differentiation. What’s more, it’s easily and widely understood. We’ve had very positive feedback from countries around the world, including China, Russia, the United States and France.”

The new audio identity is the final component of the brand’s overall communication strategy.

The sound logo project was carried out by a team representing the cultures of the Group’s host countries, in particular China, Russia and the United States. The new audio identity takes into account the Group’s international scope while respecting the cultural differences of the 170 countries in which the brand is present. 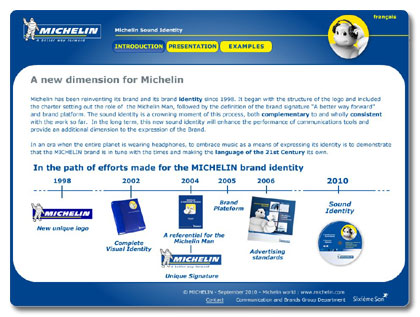