The Big Ten Conference is the U.S.’ oldest and largest Division I college athletic association. Founded in 1896, the conference is comprised of schools located mainly in the Midwest and includes world-class academic institutions such as Ohio State, Michigan State, Penn State, Purdue, Northwestern, and University of Wisconsin–Madison. Big Ten schools compete at the highest level of NCAA competition in basketball and football, and over the past decade the Big Ten has led all conferences with national titles in different sports including volleyball, track and field, cross country, wrestling, hockey, soccer, tennis and golf. Despite its name, the conference has included 11 member schools since Penn State joined in 1990, and it will add University of Nebraska – Lincoln as its 12th member in July 2011.   Pentagram’s Michael Gericke (a graduate of the University of Wisconsin) and Michael Bierut (husband of 30 years to an Ohio State alumna) have designed the new logo for the conference, announced today. The conference’s previous logo hid an “11” in the negative space around the “T” in “Ten.” The new logo evolved from this use of negative space and is built on the conference’s iconic name without reference to the number of member institutions. “Seeing two numbers at once is clever, but it means redesigning the logo every time the conference expands,” says Bierut. “It was time for something direct and simple.” The resulting logo features contemporary collegiate lettering with an embedded numeral “10” in the word “BIG,” which allows fans to see “BIG” and “10” in a single word. “The new logo was developed to symbolize the conference’s future, as well as its heritage and tradition of competition,” says Gericke. “Going forward, fans will know The Big Ten will always be the Big Ten.” “The new Big Ten logo provides a contemporary identifying mark unifying twelve outstanding institutions,” said Big Ten Commissioner James E. Delany. “It conveys some elements from the past while simultaneously introducing new features. We think the new logo is fun and has something for everyone.”   Project Team: Michael Gericke and Michael Bierut, partners-in-charge and designers; Don Bilodeau, Joe Marianek, Matt McInerney, Michelle Leong, Jed Skillins, designers. 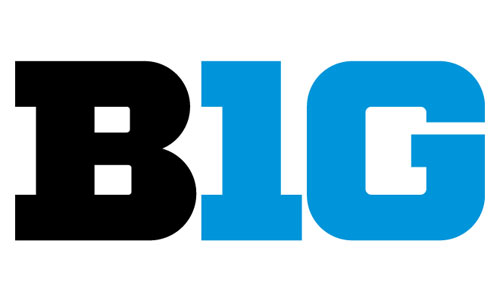 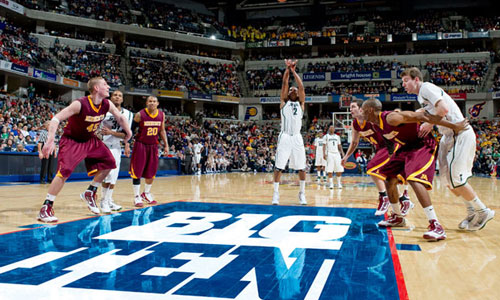