Pentagram: Museum of Chinese in America 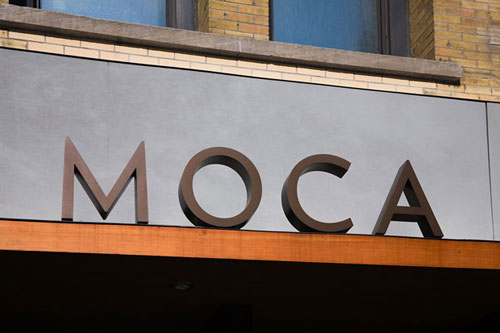 Happy Chinese New Year! Welcome to the Year of the Golden Rabbit. Today the beginning of the Lunar New Year is celebrated in Chinese communities around the world and across the United States, including New York’s Chinatown, where Pentagram has designed an identity and environmental graphics for the Museum of Chinese in America (MOCA), the leading national museum devoted to preserving and presenting the history, arts and culture of people of Chinese descent in the U.S.

During the past year, MOCA celebrated its first anniversary in its new home designed by the architect Maya Lin. Founded in 1980 as a project to commemorate the history of New York’s Chinatown, the museum has grown over the years and is now recognized as an important national institution. In 2009 the museum relocated to a space at 215 Centre Street, a 12,000 square-foot former industrial machine repair shop on the border of Chinatown and Soho. After many years at 70 Mulberry Street, a location it shared with other community groups (and where it still maintains a Collections and Research Center), the move to the new space marked the institution’s growing confidence and optimism.

Pentagram’s Michael Bierut and Yve Ludwig designed an elegant new identity for MOCA that takes its cues from Lin’s architecture. The square logos—one the museum’s full name, the other the acronym—work in combination with their typical “chop” in Chinese characters, which the designers also modified. The word “Chinese” (or, in the acronym version, the letter C) is marked with a color shift to emphasize the museum’s focus. The same square motif recurs in other layout elements and the signage. Like the space itself, the identity and graphics avoid any overt references to the clichés of Chinese or Asian culture. Instead, the identity is meant to be a neutral frame, with the subject matter of the museum’s collections and exhibitions providing the specific and authentic content. The font Verlag is used throughout.