LATAM Airlines Group executives have announced the new LATAM brand, result of the union between LAN and TAM. The announcement for journalists took place at two events in Santiago, Chile and Sao Paulo, Brazil.

The new brand is a result of nearly two years of work with Interbrand, the world’s leading brand consultancy, in its Sao Paulo, Santiago and Madrid offices.
“From the very beginning, every step of this project has been eagerly awaited. Two of the largest aviation companies in Latin America have joined forces, each with strong and recognized brands. The creation of LATAM is a milestone in aviation history; the first time that two major airlines are allied under the same new flag,” says Daniella Bianchi, Managing Director of Interbrand Sao Paulo.

A NEW NAME
The future of LAN and TAM has been the result of careful planning. A comprehensive audit and research programme was conducted, including consumer research across 10 countries, an analysis of both brands’ strengths and impacts of changes for all stakeholders. The insights confirmed the opportunity to create a new brand that would combine the equities of the two brands. “To use only one of the two brands, LAN or TAM, would be to ignore the other’s strength. Keeping both reflects a new era for the company”, says Beto Almeida, Managing Director of Interbrand São Paulo.

A reconciliation strategy was drawn, connecting the best of two worlds. Having explored several alternative names; “LATAM” proved to be the name that best represents the brand’s new spirit. Formed by a hybrid of “LAN” and “TAM”, the name respects both companies’ roots and recognises their successful legacies within the new brand. Used as an abbreviation for “Latin America”, LATAM is a name that precisely illustrates the company’s new identity.

Our approach embraced the challenge of creating the first Latin American brand. This implies building and celebrating a new culture, capable of bringing together diversity and fostering a sense of belonging. The construction of this brand strategy took into account the target audience and the insight that LAN and TAM symbolise two pillars of Latin-American culture: a pioneering nature and a genuine interest in people.

“No one could be better than LATAM to embrace this territory. After all, it is more than a Brazilian or a Chilean company: it is Peruvian, Argentinean, Colombian. It grew and built an identity throughout every country in Latin America”, says Maximo Rainuzzo, President Southern Cone, Interbrand.

A VISUAL IDENTITY
The lines in the new logo are inspired by a figurative representation of the continent’s own geography. Coral and Indigo are the brand’s new main colours. Indigo is the result of the intersection of red and blue – colours of TAM and LAN, respectively – and symbolises LATAM’s efficiency and elegance. Coral represents the brand’s passion and care for their customers. These central colours are complemented by a secondary palette, to evoke the continent’s diversity. The symbol’s design connects with the logo’s proprietary typography and the letters combine both straight and rounded corners, bringing together a sense of efficiency and proximity that is distinctive to the new brand.

NEXT STEPS
The announcement of the new brand is only the first part of the project developed by Interbrand, which includes the process of internal engagement and curating all the brand’s touch-points with its stakeholders. “LATAM is not only a new identity: it is the realization of a new experience", adds Beto Almeida.

In a gradual three year process that begins in 2016, the public will see several innovations across the brand, from environmental identity in airports and offices, to employee uniforms and the aircrafts themselves.

Gonzalo Brujó, Interbrand CEO EMEA & Latin America concludes “strong brands are not built overnight. Changes in the airline industry are particularly complex and there is still a process of 'letting go' from the previous brands, whose history is considered within the new brand. But we are convinced that the result will be a top global brand, capable of uniting global excellence to the best of local culture”. 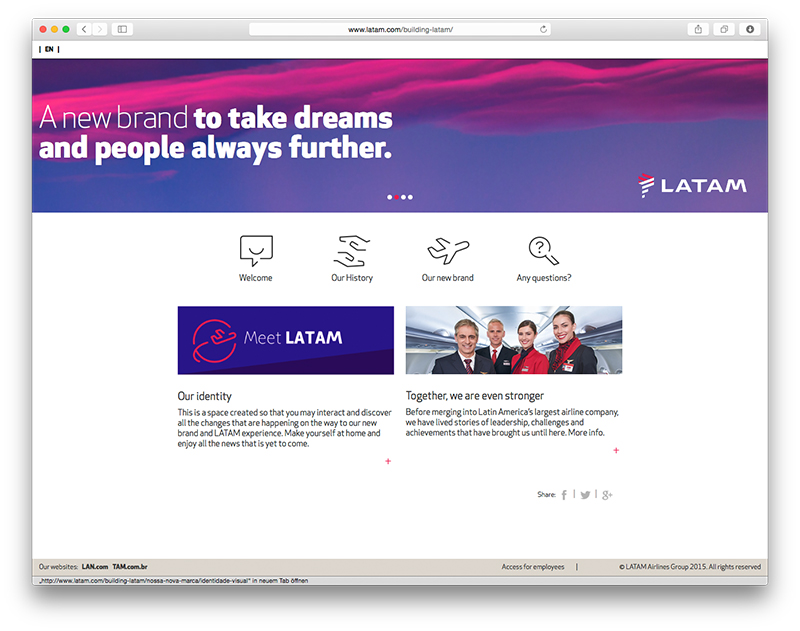