The Group will market itself towards the Norwegian and Nordic business markets with the new name, Bring. Private customers, the post office network and daily postal delivery in Norway will keep the Post name and get a new and modernised Post logo. The brand renewal comes after the group has grown significantly in the Nordic region. Through investing in its own activities and through purchases totalling more than 5 billion kroner, Norway Post is in a solid position within the Nordic market. By the end of 2007 Norway post had become the largest post and logistics company in the Nordic region. The entities which were purchased have increased the Group’s turnover by 10 billion kroner in 3 years, and a comparable expansion is planned for the coming years. The aim is to double turnovers by 40 billion kroner outside Norway by 2011, says CEO of Norway Post, Dag Mejdell. 24 percent of Norway Post's income for the half year 2008 came from activities outside Norway.

Leading in the Nordic region

Norway Post's strategy is to be a leading actor within post, logistics and IT in the Nordic region. Customers are increasingly Nordic, and Norway Post offers solutions which cover Nordic needs from simple distribution centres to complex logistics solutions. The post and logistics activities covered by the Bring brand are: Norway Post's business offer, including Nor-Cargo, Frigoscandia, Transflex, Box, CityMail, Talk2Me and Customer:view. Norway Post's IT entity ErgoGroup, is not included in the brand name transformation.

The largest rebranding in Norway

Altogether, Norway Post’s transformation will be one of the largest ever to happen in Norway. The total cost of Norway Post’s rebranding in 2008 will be 300 million kroner, of which 150 million is being spent on development and the launch. The rebranding of vehicles and materials will take place over a three year period and we expect that the major part of the remaining rebranding can take place in connection with normal operational changes throughout 2009 and 2010. - The rebranding is a major financial effort and an important investment for the future. Our Nordic strategy demands that we present a clear brand image in the Nordic region - and that the customer can see our complete offer, says the CEO. 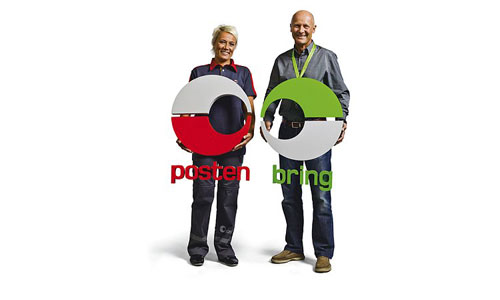