Griffin Technology Inc., maker of ingenious ways to power, play, protect and connect, today unveiled its new visual brand. Built around an entirely revamped wordmark, the new graphic identity presents a striking visual signature for a company that continues to redefine the way technology enhances our lives every day.

"We have always striven to create products that make technology more accessible," said Paul Griffin, Founder and CEO of Griffin Technology. "Simple, clever technology is the result of a lot of hard work and personal vision. Our new visual brand clearly communicates the fresh ideas, smart design and commitment to innovation that Griffin is known for."

During its 17 years, Griffin has grown from a small manufacturer of specialty accessories into a global leader in personal electronics. Griffin users have evolved, as well, beginning with early adopter technology buffs seeking modifications for Macintosh computers. Today, Griffin products are likely to be found in the homes, cars, and backpacks of parents, children, professionals, students—both the trend-conscious and tech newcomers the world over.

Universal appeal requires a visual identity that is globally iconic. At the center of Griffin's new look is a distinctive orange mark that resembles a "G". It presents users worldwide with a strong, cross-cultural image that is both forward-thinking and deeply rooted in Griffin brand tradition. Regardless of interpretation—a capital G, the internet's ubiquitous "@" symbol, an ear, the word "Go"—the mark is a symbol of connection and relevance in the digital age, a design with different implications to different users. The Griffin name is featured alongside the mark in a new font and color palette, completing the logo. A new color palette gives distinction and appeal to Griffin's ever-growing audience.

The new visual identity is the result of years of research and a company-wide effort to design the look and feel of Griffin. This is because Griffin, itself, is committed to a philosophy of product conception, design and presentation: Connect to Play. These words accompany the new identity, because play is not just an action—it is a frame of mind. Innovative technology removes the barriers digital devices can create, allowing users to spend more time doing what they want to do. The new look is Griffin's way of expressing this philosophy—more time to work, to play, and to connect.

Griffin's new identity debuted today at www.griffintechnology.com, as well as on the side-panels of Griffin's 1972 Volkswagen Westfalia mini-bus, now on its way from Nashville to Las Vegas for The Consumer Electronics Show. The CES Bound crew will be showing off the new logo at meetups with fans along the way, ultimately parking the bus in the Griffin booth on the CES show floor. Packaging bearing the new Griffin mark and color palette will appear in major retailer locations beginning January 1, 2010. 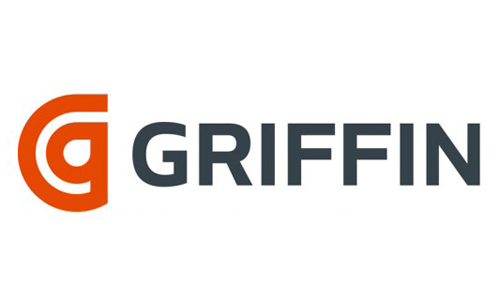