Troika Design Group, a strategic branding and design agency for global entertainment and media companies, has been tapped by NBC Universal’s Telemundo to give the Spanish-language TV network a sophisticated new identity. The new look can be viewed at: www.troika.tv/work/5.134. With a reputation for progressive and unique programming, Telemundo is the world’s second-largest Spanish-language content provider. Troika was tasked with updating Telemundo’s on-air design to reflect its bold attitude and originality, creating a unified graphics package that was clean and polished, conveyed quality, high production values, and celebrated Telemundo’s logo.

“Troika has been a terrific creative partner as we’ve assessed Telemundo's evolving identity,” said Susan Solano, Senior Vice President, Consumer Marketing, Telemundo. “Our teams worked together closely to organically develop an identity package which addresses our needs as we continue to grow.”

Telemundo’s new identity takes the abstracted letterform in the Telemundo logo and showcases its signature arc set against a bright, sleek backdrop. The package introduces a jewel-tone color spectrum, while dynamic graphics build off Telemundo’s logo and twist and turn, forming interesting cropped views of the logo.

“It’s always rewarding to partner with a new client that clearly communicates its vision, provides great creative challenges and then empowers our team with the trust to get it there,” said Gilbert Haslam, Creative Director, Troika Design Group. “The network takes pride in its history and daring original programming, so it was rewarding to give them an identity of which they can be proud. We look forward to rolling out more work for the Telemundo team in the upcoming months.”

Deliverables include an on-air identity and promotion toolkit, including IDs, promo opens, menu endpages, lower third system, video windows and multiple logo tags. Additional elements include 48 versions of affiliate IDs for Telemundo’s individual channels, all provided to Telemundo as Adobe After Effects and Maxon Cinema 4D files. The package was designed to work consistently across on-air, print and digital platforms. 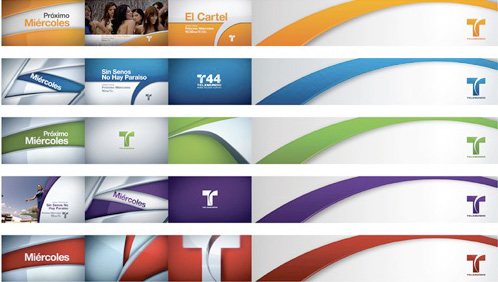