The JAL Group (JAL) today will adopt a new corporate policy and announced its decision to change its logo from April 1, 2011; symbolizing a fresh start for the airline group with its strengthened commitment to society and reinvigorated determination of the management and all employees.

The motif that will be used is of a soaring Japanese red-crown crane with its wings extended in full flight - an auspicious icon of Japan representing the high spirits of the Japanese people and their sensitive attention to detail. First registered as a trademark of Japan Airlines in August 1959, the circular crane mark was painted on the entire fleet during the period of JAL’s international network expansion. It stayed a main feature of the JAL livery for more than 40 years and became an unmistakable image representing Japan Airlines and the country it connected the world with. Bearing this mark on its aircraft, JAL displayed the uniqueness and progress of Japan to the world and it often invoked a sense of pride and familiarity in many Japanese as well as its loyal customers.

The symbol of the crane has come to be associated with the nation’s distinct hallmarks of pristine quality and reliability. For customers, JAL is determined to safeguard these values of the Japanese culture and to continue reflecting its quintessential hospitality from the heart in the airline’s authentic services - a promise that is now embodied in the Group’s new corporate policy unveiled today.

"Japan Airlines started out as a pioneer and ventured on a path where no other company in Japan explored," said JAL Group President Masaru Onishi. "Today, we firmly resolve to recapture the unity and challenging spirit that our employees possessed at the time of JAL's founding, and together, we will propel the company forward over the hurdles that lie ahead to again stand at the forefront of this ever-evolving industry."

“Now, represented by the high-flying crane, we hereby renew our commitment to provide our valued customers with the highest levels of service, and to diligently raise our corporate value so that the JAL Group can once again contribute to the advancement of society.”

The first aircraft to be painted with the new logo will be a Boeing 767-300ER for international flights. With the exception of staff uniforms which will remain unchanged, corporate items bearing the current logo such as signage, name tags and stationery will gradually be phased out over the next few years. 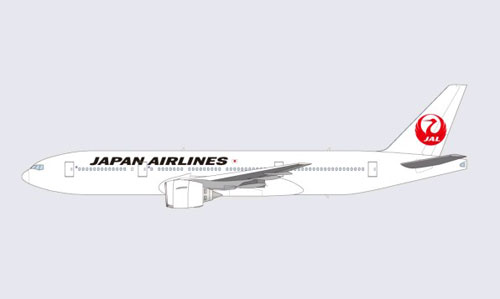