New visual identity for The Art Institute of Chicago

The Art Institute of Chicago recently opened its Modern Wing, a stunning 264,000 square foot expansion designed by the Pritzker Prize-winning architect Renzo Piano. The wing is devoted to the museum’s modern and contemporary art, photography and design collections. The Art Institute has long been one of the world’s great encyclopedic museums, and the addition of the wing officially makes it the second-largest art museum in the U.S. As part of the expansion Abbott Miller was commissioned to create a new identity for the museum as well as a comprehensive program of interior and exterior environmental graphics.

The Art Institute is well known for its holdings in Impressionist and Post Impressionist art, but it also has a strong commitment to design and possesses one of the best design and architecture collections in the country. (Miller has several pieces in the museum’s permanent collection.) “The Art Institute was an incredible influence on me,” Miller said. “I grew up at that museum, and it continues to be my favorite art museum experience in my favorite American city.”

Miller was impressed with how closely with museum director James Cuno was involved in the development of the identity. In a 2008 profile in The New York Times, Cuno said: “We realized this is a moment of renewal for the museum, and we wanted to communicate that graphically.” The new identity was inspired by the inscription of the name on the famous Michigan Avenue façade of its 1893 Beaux Arts building. Following the practice of classical and neo-classical inscriptions, the lettering on the façade uses the Roman “V” in place of the “U” in the word “Institute.” The new mark strikes a point of balance between the modernity of the Piano-designed wing and the classicism of the Michigan Avenue building. When seen in relation to the historic façade, the mark has the gravitas of an engraved cornerstone, but when seen in relation to the Modern Wing, it echoes the precision and lightness of Piano’s structure.

After photographing and analyzing the façade lettering, the team discovered an interesting counterpart in the form of a display font called Topaz, designed by Hoefler & Frere-Jones. The design uses the Topaz “V” in place of the “U.” In the Times piece, Cuno describes the font as having a “contemporary edge but at the same time recalls Wiener Werkstätte or Secessionist architecture.” When Miller approached Hoefler about developing Topaz from a capitals-only display font into a full-spectrum typeface, he learned that Topaz originated from a typeface in development that Hoefler had been wanting to finish. The completed font is now know as Ideal Sans. 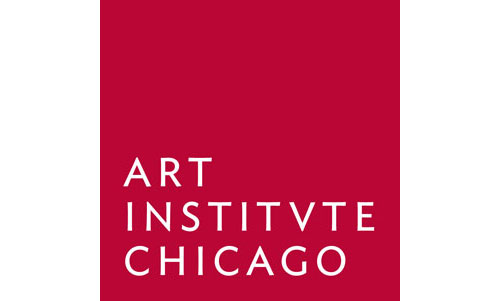 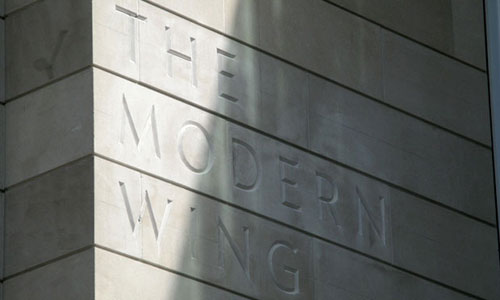